There have been persistent rumors/intel that $millions have been spent at Guantanamo Bay Naval Station (aka"GITMO") to prepare incarceration facilities for an influx of Federal prisoners related to the past 3+ years of "coup" activities.

But, until recently, there has been little evidence visible on publicly-accesible "OHI" (OverHead Imagery) that "prisoner housing prep is in the works". Unfortunately, the latest Google Earth published overflight date is 12/7/2019, so the current (2020) status is unclear.

Maps of the naval facility at Guantanamo Bay are hard to obtain, but this section of an old "Visitors Map" provides identity and information on areas near the entrance channel which will prove to be of interest.

Frequent monitoring of the well-known "Detention Area" on the east end of the GITMO property (at lower right, above) indicates that the last significant, visible changes occurred ca 2013 or earlier.

There were internet rumors that two "Prison Barges" were headed for GITMO, and that $$$ was being spent on renovating a pier for docking them. But -- the only visible evidence was that an old pier/dock was REMOVED! There's been zero evidence of either of the prison barges appearing at GITMO.

On the QMap.pub "Theme" page for "GITMO", there was an (apparently, CGI) depiction of a new GITMO detention site:

However, no landform in the existing detention center area matched it, so, several unique features in the image were ID'd and labeled: 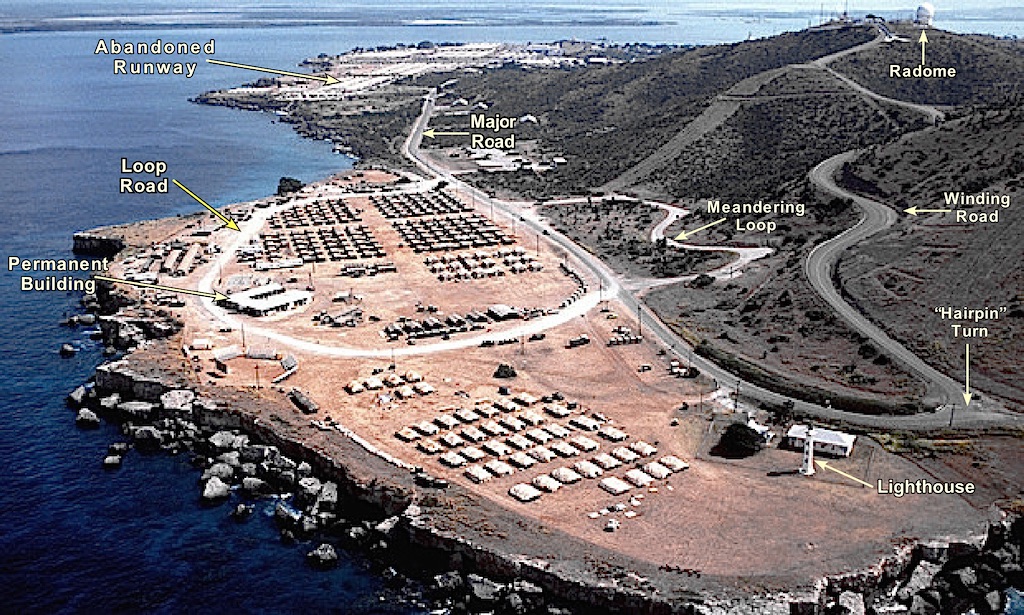 Then, the landform & features were matched on Google Earth: 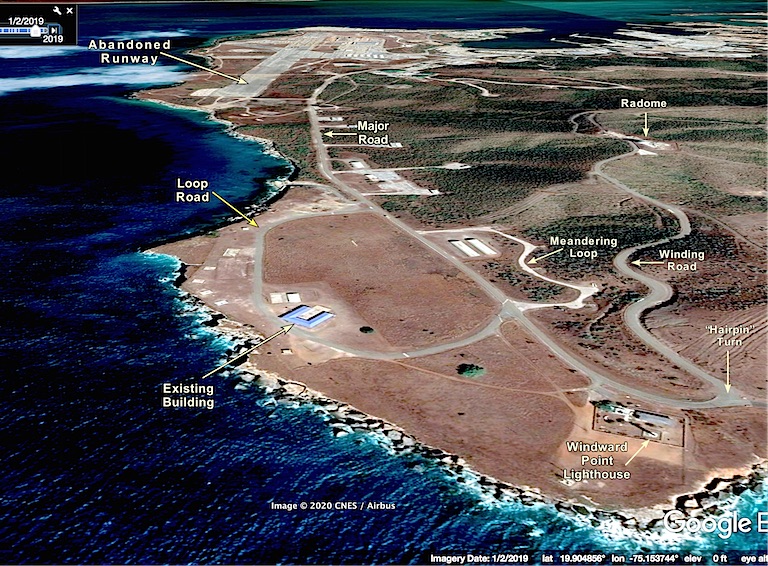 Which clearly indicates that the site for the "QMap.pub" image is "Phillips Park" which was designated for the use of ships' crews on shore leave. (But, virtually no naval vessels spend significant time at GITMO, nowadays...) 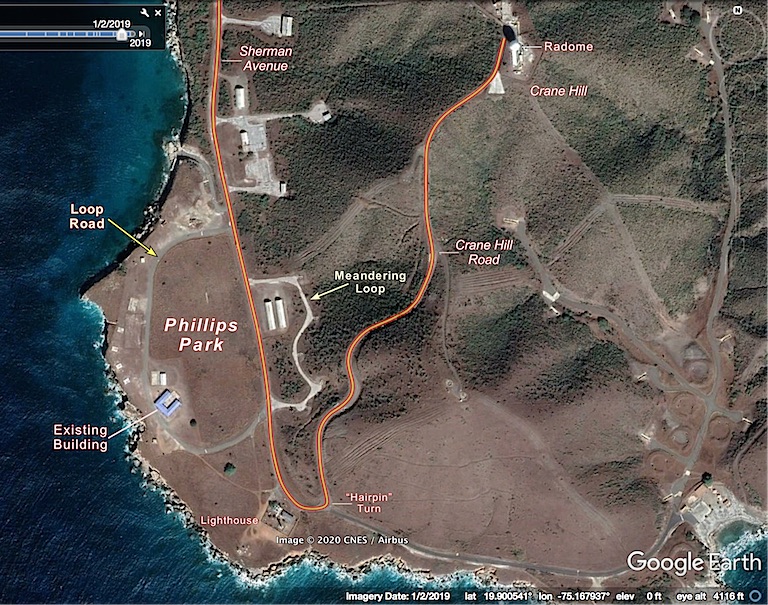 However, as of 12/7.2019, there was zero evidence of any construction activity in the Phillips Park area.

Is there any indication that GITMO is being "Prepped" for prisoners?

In the southwestern corner of the Naval Station property -- northwest of the airstrip on Leeward Point -- there is an area that was used for housing and recreation for the transient MATS aircrews and USAF personnel assigned to the airfield -- as highlighted at left on this old map and on the "overview" photo at top. 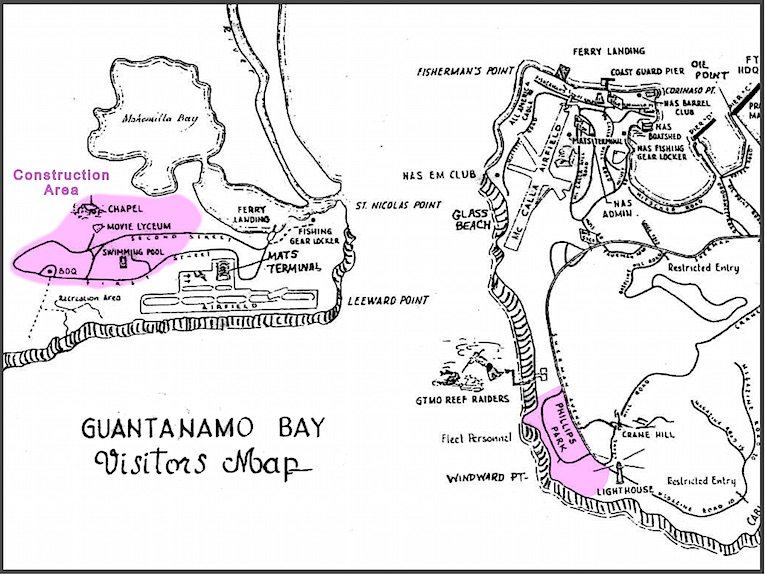 By December, 2018, extensive "dirt work" (site preparation) had begun in the area, and, as of December, 2019, there were indications of twelve clusters -- of twelve small structures each -- visible on Google Earth at the site. (144 new structures...) 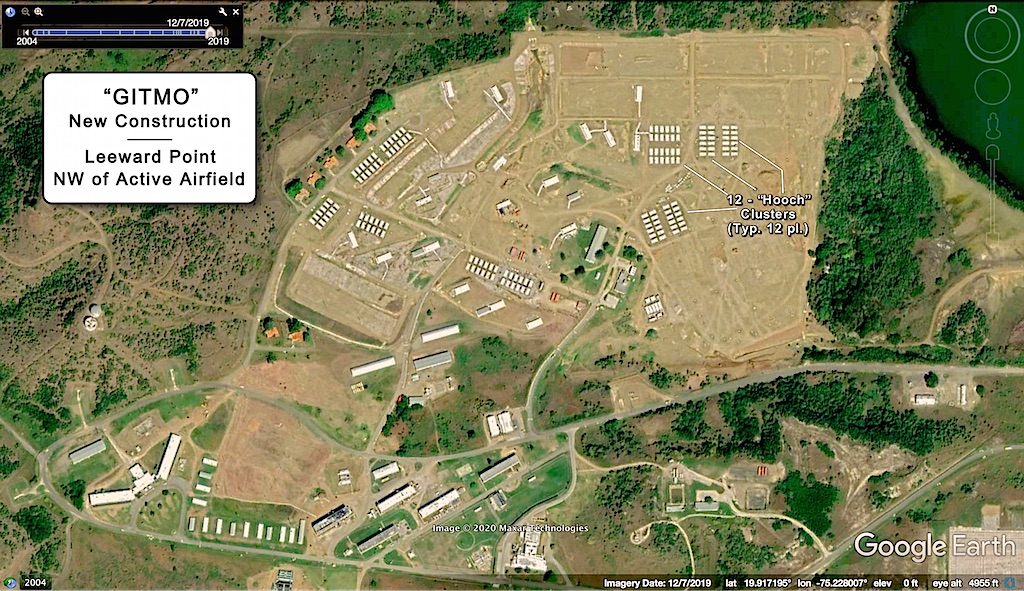 The resolution of the shadowless image precludes determining whether the structures are tents or other pre-fab shelters -- so the GI "catch-all" term for field shelter, "Hooch" was applied. '-)

At the ~5k foot "eye altitude" required to show the entire site, they look tiny -- but Google Earth measures them as 20 ft X 36 ft.

NOTE: in neither the "QMap.pub" conceptual sketch nor the above OHI is there yet any evidence of security infrastructure (fences, guard stations, etc...)

Bottom Line: GITMO is, apparently, gearing up for lots of prisoners.